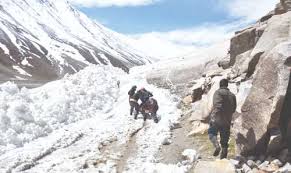 It is information that this transit camp is in the grip of the glacier. But when it came to the gallstones, it has not been detected yet. But the exposure of transit camps was revealed when people's movement in the area increased. The transit camp of 94 RCC of BRO at Koksar, 20 kilometers away from Rohtang Pass, at Lahaul gate, has collapsed due to the fall of the Himachand.

This can be judged by how fast this glacier has come.
94 RCC commanding officer Harish Babu said that the watchdog of Koksar and 94 informed him about this, although it has not been able to get the information of the glacier when it has yet been found but the damage has been reported. Therefore, due to the devastation of the transit camp, the BRO has temporarily installed the Lonivi rest house camp in Sisu.
Tag : desh