HOME » desh » ISIS claims: Three of our terrorists blew themselves in the Red Army security forces in Sri Lanka

ISIS claims: Three of our terrorists blew themselves in the Red Army security forces in Sri Lanka 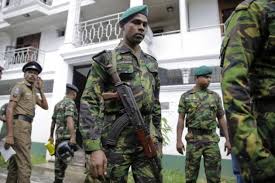 Colombo: Islamic State claimed that during the encounter with the security forces in Sri Lanka's Eastern Province, three of its terrorists have been killed, who had fired themselves. The encounter took place on Friday, when the security forces were looking for members of the National Towheed Jamaat (NTJ), a local militant group responsible for the blasts that targeted the churches and hotels on Easter occasions. About 300 people were killed and more than 500 were injured in these blasts.
According to a report of the Colombo Gazette, the IS communiqué committee 'Amak' said in a statement that Abu Hamad, Abu Sufyan and Abu al-Qa'ka were killed. It has been said that he fired with automatic weapons and after the 'ammunition' was overturned, he blew himself through the explosive belt.

Significantly, the Special Task Force (STF) of the police and the army personnel raided a house in Kalamunai town, about 360 km from Colombo on the basis of an intelligence, after which a fierce encounter with the armed group happened. Armed people opened fire on jawans A citizen who was hit by the encounter also died. During violent clashes, it is believed that three people have been blown away by explosives. A total of 15 bodies including six children and three women were recovered from the spot.

0 Comments for "ISIS claims: Three of our terrorists blew themselves in the Red Army security forces in Sri Lanka"