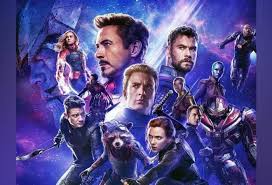 - 'Avengers Endgame' has become one of the highest grossing films in India and the Rs. 300 crore benchmark touching Hollywood movie. The special thing is that the film has made its last series 'Avengers: Infiniti War' in the top of the series, which earned Rs 227.43 crores in India.
World's second highest grossing film

- 'Avengers Endgame' is the world's second highest grossing film. The film has earned $ 1,569 billion (around Rs 1,808 crores) Worldwide till the second weekend, which is more than the second highest level 'Titanic' (1997) earnings of $ 1.258 billion (about 8723.7 crores). At the first place in the list, 'Avatar' (2009) is at the top with a collection of 2.187 billion dollars (about 15156 million rupees).
Read among the success of Avengers Endgame around the world, talks from both screenwriters of the film
The interviewer who struck Ironman, under the special contract from The New York Times
Hollywood desk Screenwriter Christopher Marcus and Stephen Mcphilly wrote the Avengers: Infinity War, Avengers Endgame, Captain America's three films, Thor: The Dark World, Marvel TV Series, Agent Carter. Read the key points of the conversation with them.
Question: How did you decide how and when the special events of Infinity War and Endgame will decrease?

Question: The journey of Iron Man ended. Killed him?

Answer: We all felt that Tony Stark's work has been completed. We did not have any major reason to do this. There was no better chance of giving Ironman a perfect retirement. That's also in the movie. Iron Man always wanted the same life. This is not a tragedy, it's the end of the life of a hero. Which is filmed well

Question: How did your team choose those characters who will survive for the endgame?

Answer: We wanted Captain America and Iron Man to appear in conflict between the impact of the universe after half the end. That's why we kept Capt America and Natasha roll in the first part of the game. These were shown more in the second part. The characters like Guardian appear more in the first part. Thor had we rolled in both the parts. Thor used to think that boring was the first few people, so this time we showed enough entertainment.

Question: Is there any role of Marvel that you wanted to bring in but could not bring?

Answer: We also wanted to bring The Living Tribunal in the film. For that we also wrote a special scene that he would enter Titan Fight, but later he could not fit it in us. His three heads did not fit in the architecture and story of Seen
. Therefore removed.
Question: Which scene you wrote, but not in the movie?

Answer: There was a scene in which the war stops for three minutes. All superheroes plan who will do that. Then we thought that such a conversation would not be natural among such superheroes. We did not like the plot to make such a conversation in the middle battle.
Question: At the beginning of the game, the film goes five years ahead. Is this inspired by any TV series?

Answer: Where did we end our previous film, we had to do the same at Endgame. We wanted to look real time in time and in the chronological time of the character. You can not eliminate Natasha, Tony and Steve until we tell them that they have done their job.

Question: How did the idea of ​​Time Travel Story Line come?

Answer: Kevin Fez (Marvel's President) told us once that I want to use Time Stone. Or there should be some time related to it. After this, we thought weeks later that we do not have a break in the film and the audience is interesting too. We thought of all the characters we thought did not use Ante-Man. There was also Quantum Realm in Maysui
Question: Why did Natasha have to kill?

Answer: According to our opinion, if Natasha returns to Avengers, her role is complete. We just thought we had an end to the time when the problem does not end in the film. Therefore, the film goes forward and the viewer does not regret it too.
Question: The Ant-Man was not in Infinity War. But the effect of finishing half of the universe by pinching is also on that. You also added an Ent-Man and the Wasp movie to it. How did this happen?

Answer: It was decided in 2015 that we will write 19th Film (Infinity War) and 22th Film (Endgame). We took it as a big opportunity. We kept the Ant-Man till his film. But it was included in the endgame. This can be done when you advance your planning a lot
Tag : hollywood